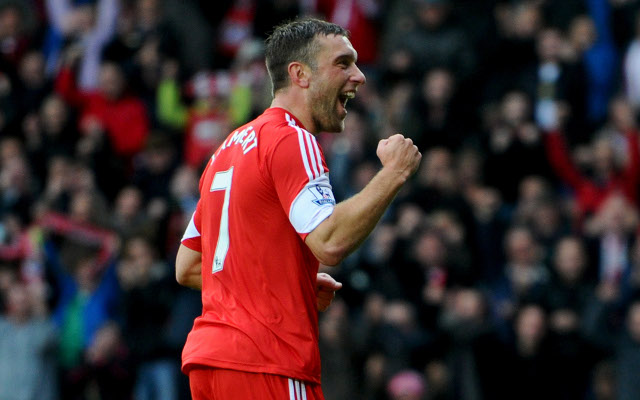 Saints hitman closes in on return to boyhood club.

Southampton and England forward Rickie Lambert has agreed a two-year contract with Liverpool, according to BBC Sport.

The 32-year-old, who scored 13 goals and provided 10 assists in 37 Premier League appearances for the Saints this season, is expected to have a medical with the Anfield club on Saturday.

The two clubs appear to have agreed a transfer fee, which is believed to be in the region of £9m.

Liverpool agree deal to sign Rickie Lambert from Southampton on 2-yr contract. Striker will have medical on Saturday. pic.twitter.com/pSFkxLlgtZ

Lambert is part of Roy Hodgson’s England squad for next month’s World Cup in Brazil.

He may be given the chance to add to his tally tonight, as the Three Lions host Peru in a friendly at Wembley Stadium.

Lambert was born in Kirkby and supported Liverpool as a boy. He was on the books at Anfield until the Reds released him aged 15.

He is unlikely to become a first-team regular on Merseyside, considering Luis Suarez and Daniel Sturridge netted 53 league goals between them this term.

However, with the Reds about to embark on their first Champions League campaign in five years, Lambert’s will add much-needed depth to Brendan Rodgers’ squad.