Chelsea boss Jose Mourinho has been given the backing of Blues owner Roman Abramovich ahead of a big money bid for Tottenham pair Paulinho and Christian Eriksen.

CaughtOffside understands that Mourinho is keen to bring in the duo and is ready to counter the cost by offering midfield enforcer John Obi Mikel as part of the deal as he continues to adopt a sensible approach to his squad building plans.

Mourinho fears he may lose either Eden Hazard or Oscar, with both players strongly linked with Stamford Bridge exits in recent weeks, and has earmarked a move for talented Danish youngster Eriksen to act as a possible replacement and to offer further creative options in the final third.

The 22 year old had an excellent debut season at White Hart Lane, one of the few players brought in by Andre Villas-Boas last summer that has proven his worth, but the fact Tottenham failed to secure a Champions League berth may make Eriksen all the more tempted by a move from north to west London. 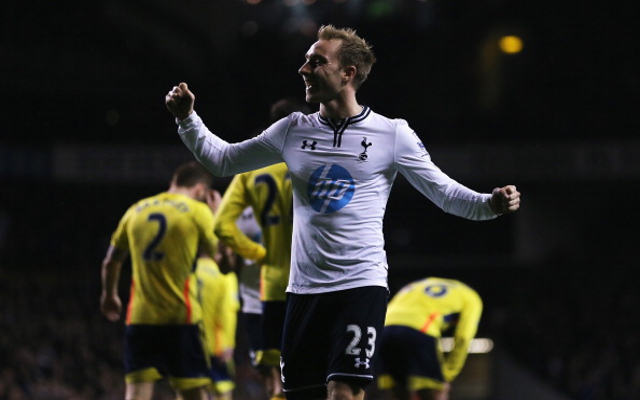 Mourinho is known to be interested in signing Paulinho and with David Luiz having been sold to PSG the Portuguese boss is set to step up his pursuit of the combative midfielder.

Chelsea are keen to adhere to UEFA’s FFP (Financial Fair Play) guidelines and Mourinho was an intelligent operator in the January transfer window as he brought in Kurt Zouma, Mohamed Salah and Nemanja Matic from Saint-Etienne, FC Basel and Benfica in moves that were more than funded by the sales of Juan Mata and Kevin de Bruyne to Man United and Wolfsburg.

In a similar fashion Mourinho will offer the £40m from Luiz’s sale to Tottenham, as well as Nigerian battler Mikel, in exchange for the Spurs duo.

Tottenham chairman Daniel Levy may be tempted to accept such a deal as he looks to deal with the appointment of yet another new manager.

Levy handed former boss Villas-Boas in excess of £110m on new players only to see his side fall further off the top four chase, therefore a move that sees the club secure an experienced Premier League campaigner whilst also bringing in £40m to re-invest in the transfer market could bear fruit.