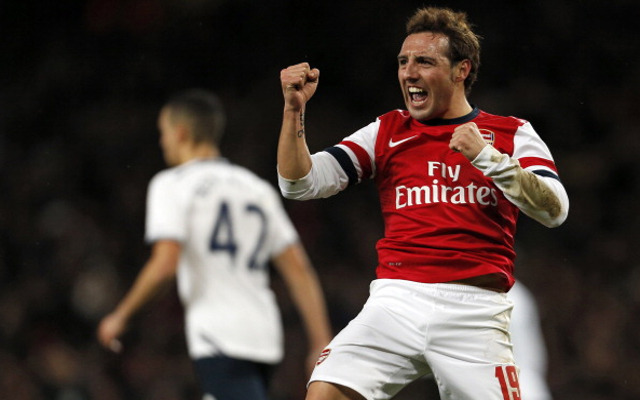 Cazorla hopes Fabregas moves to Chelsea instead of Arsenal…

Arsenal’s Spanish playmaker Santi Cazorla has hinted that his club should do all they can to bring Cesc Fabregas to the Emirates this summer, reports the Metro.

It had been widely reported that the 27-year-old midfielder is closing in on a move to Chelsea, who were targeting the Barcelona ace to replace the departing Frank Lampard.

Although Jose Mourinho’s side are still favourites to snap up the former Arsenal star, Cazorla wants his Spanish international teammate to join him at the Emirates instead.

“I have read that Cesc could go to Chelsea but I prefer that he comes to Arsenal,” Cazorla said, who is part of Vicente del Bosque’s World Cup squad alongside Fabregas.

“He has given a lot to the club and he knows it well.

“I hope that he is happy, he chooses his club well and is comfortable there.

“I don’t see any differences between his performances in the Premiership and with Barca. His record is spectacular at Barcelona and he has demonstrated that he has adapted but they haven’t given him the same value as in England.”

The comments will mirror the thoughts of most Arsenal fans, but they arguably seem strange coming from the mouth of Cazorla, whose place in the Arsenal lineup will undoubtedly be under threat if Fabregas did re-join Arsenal!

Fabregas starred for the Gunners between 2003 and 2011, and although he’s contributed well statistically at the Nou Camp since his move to his boyhood club, he’s not had the pivotal influence he did during his stint at Arsenal.

Arsenal though already have attacking midfielders like Cazorla himself, Mesut Ozil, Aaron Ramsey and Jack Wilshere available to Arsene Wenger, and it’s thought that the club will prioritise strengthening elsewhere first.