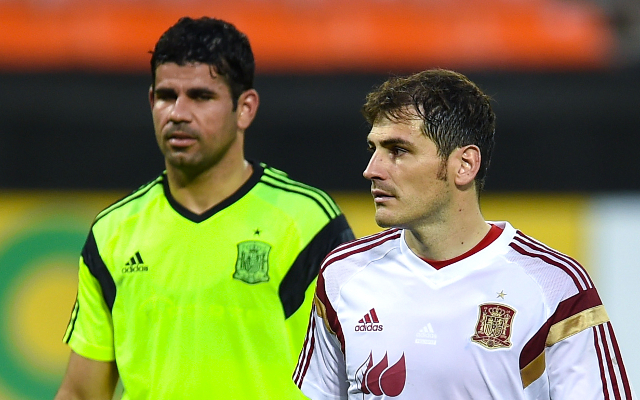 Costa will be hoping to fully recover from injury to lead the line for Spain.

The defending champions arrive in Brazil with many doubting their ability to win the tournament, but Spain still boast a highly talented squad capable of winning it all again.

With Sevilla winning the Europa League and Real Madrid lifting their tenth Champions League, it has been another successful season for the Spanish at club level in Europe.

The national team has of course won back-to-back European Championships, while La Roja also secured a World Cup back in 2010 in South Africa to continue their dominance at international level.

With the likes of Cesc Fabregas, Santi Cazorla and David Villa only expected to make the bench, the story tells itself regarding how much talent there still is in this squad, but with teams finding a way to better cope with their dominant possession, it will be difficult for them to hold on to their crown.

After making the decision to switch allegiance last year, all eyes will be on Diego Costa, provided that he recovers from injury, as he will likely be the focal point of the attack with the alternatives lacking real goal-scoring pedigree this past season.

Costa scored 27 league goals last season as Atletico Madrid secured a well-deserved domestic championship, but they were unable to seal the double after defeat in the Champions League final to city rivals Real Madrid.

Nevertheless, it was a memorable campaign for Diego Simeone and his players, but ultimately the national team is still predominantly made up of players from Real and Barca.

The familiarity of playing at both club and international level has undoubtedly helped Spain to rise to prominence over the past six years, and it is clear that this generation of world class footballers still have plenty to offer.

Sergio Ramos and Gerard Pique will form the foundations in central defence, and you can expect tireless efforts from the wing-backs to provide width and stretch the play in order to allow those further infield to carve out opportunities.

The Barcelona trio of Sergio Busquets, Xavi and Andres Iniesta provide the creativity and flair alongside David Silva and the vision and steadiness of Xabi Alonso rounds off what is undoubtedly an impressive midfield.

Add a firing Costa to that line-up, and Spain will be challenging come the business end of the tournament but as shown in the Confederations Cup last year, they won’t have it all their own way.

Spain conceded fewer goals in World Cup qualifying than any other team with a measly three, and while they will be difficult to break down as a result of retaining possession so well, goals could end up being the issue.