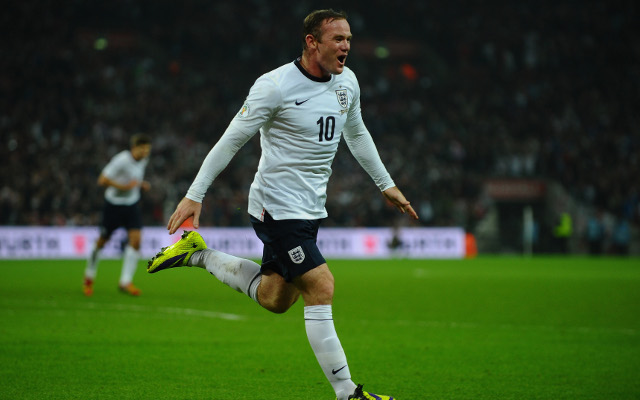 Should the £300k-per-week striker be deployed on the left for England…?

Ahead of England’s pre-World Cup friendly with Ecuador in Miami, it looks as though talisman Wayne Rooney is going to start the game on the left wing.

Rooney is the highest paid English footballer by far – and the most successful at club level too – but due to the success and the pace of Daniel Sturridge centrally, many are questioning whether the Manchester United striker will be given the pivotal role this summer that was expected.

Be great to see an England boss leave Rooney at home. He’s had a terrible season and doesn’t deserve to go.

Rooney playing on the left wing is no more stupid than Sturridge playing there — co (@colescore) June 3, 2014

In training for the Ecuador friendly, #eng lined up with Milner at right-back and Rooney left wing — Henry Winter (@henrywinter) June 3, 2014

I don’t think Hodgson has the cojones to drop Rooney from his starting line up.

@ashley__a23 dropping Rooney would be absolutely thick as fuck

Don’t like all these drop Rooney quotes-he’s r best striker(world class) and the person we need in r team/scoring for eng to do well!! — Philip Neville (@fizzer18) June 3, 2014

Analysis: Rooney has been pushed left at MUFC in the past, but not for England. Could it be a long-term solution? http://t.co/rXh5sdDyjs — Sam Wallace (@SamWallaceIndy) June 3, 2014

Another World Cup coming up another chance for the media darling Wayne Rooney to let his country down on the big stage — David Hickman (@DavidHickman87) June 3, 2014

England cranking up their implosion already with the media pressure on Rooney I see — David Keith (@DKeith0904) June 3, 2014