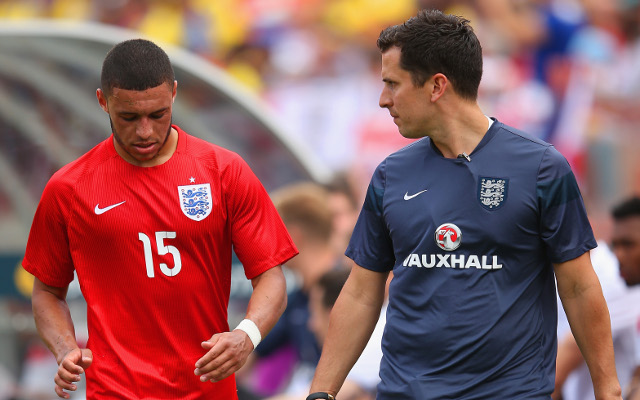 Oxalde-Chamberlain is also a doubt for the other two group matches.

There is bad news for England ahead of their 2014 World Cup opener with Italy on June 14 as Arsenal midfielder Alex Oxlade-Chamberlain is out with a knee injury.

The 20-year-old is also a doubt for the Three Lions’ remaining group games with Uruguay and Costa Rica, depending on how long it takes the youngster to regain full fitness.

National team manager Roy Hodgson now has a tough decision to make as to whether to keep Oxlade-Chamberlain in the squad or drop the starlet in order to take a fully fit replacement.

However, if Hodgson chooses the latter options are limited for the 66-year-old, with fellow Gunner Theo Walcott and Tottenham Hotspur winger Andros Townsend also out with injuries currently.

Oxlade-Chamberlain picked up the problem during the country’s 2-2 international friendly draw with Ecuador on Wednesday, a match where the head coach experimented with players not usually considered in the starting XI.

The ace from North London was among those who started the match in Miami, picking up his 15th cap for his nation and also maintaining his impressive record of never having lost a game in an England shirt.

Alex Oxlade Chamberlain this morning, heading to a recovery session with rest of England squad, his knee in a brace pic.twitter.com/EDTAaXSB0k