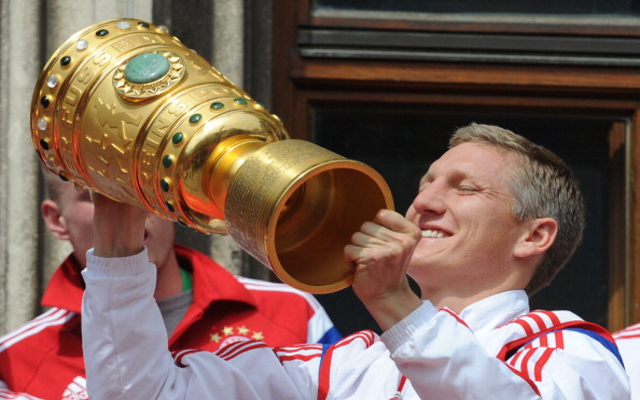 The 29 year old star started just 22 Bundesliga fixtures last term and was on times left warming the bench, a situation that is unknown to the fan favourite and Guardiola is apparently open to ‘ditching’ the big earner to help make room for the Spaniard to conduct a spending spree of his own.

Incoming Old Trafford boss Louis van Gaal knows Schweinsteiger well and is credited with the move to use the talented seven time Bundesiga title winner in a central midfield role and the Dutch boss may be the man to tempt the Bayern Munich man into a fresh challenge having represented the Bavarian club since the age of 14.

Van Gaal has seemingly opted against continuing Man United’s ongoing push for Barcelona midfielder Cesc Fabregas and could see Schweinsteiger as the man to offer him real quality in the centre of the park.

One imagines that the likes of Tom Cleverley, Micheal Carrick, Darren Fletcher, Marouane Fellaini and loaned out Brazilian Anderson may all be in danger of being offloaded as van Gaal looks to strengthen the squad he inherited from former boss David Moyes.

Schweinsteiger has racked up 473 appearances for Bayern Munich since making his debut for the German giants back in November 2002.