German daily Bild, well regarded for having close links to the national team, has published it’s predicted lineup for the national side’s opener against Portugal on Sunday night.

Germany are favourites to beat a Cristiano Ronaldo inspired side – but this XI manager Joachim Loew is expected to put out may surprise supporters worldwide. Not only does Arsenal’s world-class playmaker Mesut Ozil miss out on a starting spot, but so does Bayern Munich ace Mario Gotze – who scored  15 goals in all competitions last season.

In their place, Bild claims Germany will select Chelsea’s Andre Schurrle and Arsenal’s Lukas Podolski instead, neither of which were automatic starters for their Premier League sides last season.

In midfield, Philipp Lahm will be used in the anchoring role instead of at fullback, and he will sit behind Sami Khedira and Toni Kroos either side of him.

At the back, Arsenal’s Per Mertesacker should partner Manchester United target Mats Hummels, with natural central defender Jerome Boateng playing on the right of the back four, and Benedikt Howedes on the left – who even more bizarrely – is naturally a centre-back as well!

More predictably, Manuel Neuer is selected by Bild between the sticks! 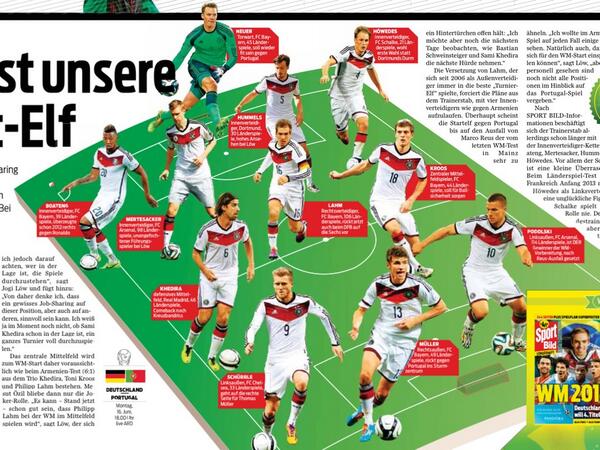