Liverpool boss Brendan Rodgers will look to continue his spending as he seeks to pull off something of a transfer masterstroke this summer with a move for two Bayern Munich stars who could be open to leaving the Allianz Arena.

CaughtOffside understands that the Anfield side are already in advanced talks with the Bundesliga side in relation to their long running interest in Swiss youngster Xherdan Shaqiri and Rodgers is also looking to sign Spanish international battler Javi Martinez.

Rodgers is keen to bring in a strong tackling midfielder as concerns grow over Brazilian enforcer Lucas Leiva’s long term fitness, the Liverpool man having suffered with knee concerns for a number of seasons, and believes he can lure Martinez to Merseyside with the promise of the regular first team action he is struggling to secure at Bayern Munich.

Martinez failed to start either of Bayern Munich’s Champions League semi-final encounters with Real Madrid last term and may feel the time is right to leave the Bavarian outfit. 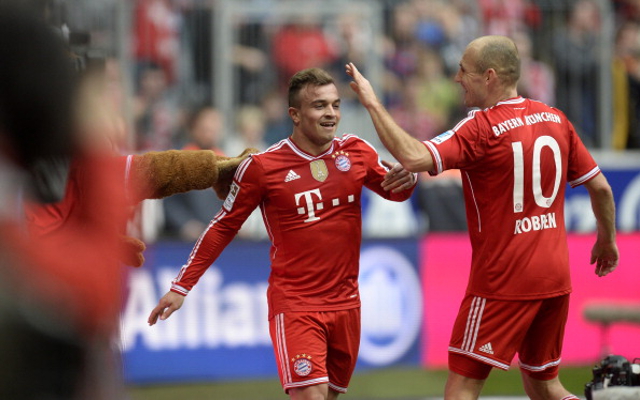 Shaqiri is another player who isn’t getting as much action as he’d hoped with the 22 year old making just ten Bundesliga starts in 2013/14 and wasn’t selected to start a single Champions League fixture and as such has been strongly linked with a summer exit.

The former FC Basel man is seen by Rodgers as an ideal third prong of a potential attacking triumvirate that would see him line-up alongside Luis Suarez and Daniel Sturridge, and it’s a move that Shaqiri is said to be considering.

With the likes of Franck Ribery and Arjen Robben filling Guardiola’s spots on either wing it seems likely Shaqiri is due another season or two of bench-warming and as such could be open to a move to a Liverpool side who not only secured a return to the Champions League but also mounted a genuine Premier League title challenge last term.

Liverpool are ready to offer a combined fee of £42m for the Bayern Munich duo and it could be an offer Guardiola considers, especially if he is seeking to bring in a few fresh faces of his own this summer.