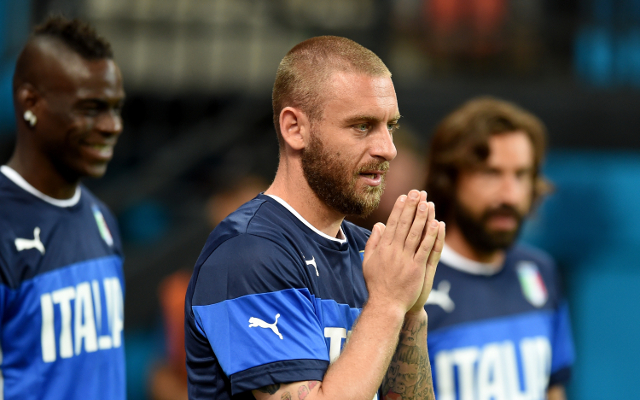 De Rossi was overcome when up against Gerrard.

Italy and AS Roma midfielder Daniele De Rossi admitted it was emotional playing against Liverpool captain Steven Gerrard in the 2014 World Cup clash with England on Saturday.

The Italians ran out 2-1 winners in the end during the tournament opener between the two sides, thanks to goals from Claudio Marchisio and Mario Balotelli.

Yet despite the fact De Rossi’s side were victorious over Gerrard’s, the 30-year-old admits that he was in awe of the Three Lions skipper.

“It is never normal for me to play against Gerrard,” the Roma star was quoted by the Daily Mail.

“It always gets me emotional, I won’t deny it.

“Of course, on the field you’ve got to get stuck in there, but it is always a pleasure and an honour. He’s also a very nice guy, always very approachable.

“I cheered on Liverpool until the end, but they lost the Premier League title in an incredible way.”

The result leaves the Italians in a great position to qualify for the last-16, which they can confirm when they take on Costa Rica in their second group game on Thursday with another win.

The English meanwhile need to beat Uruguay on the same day to give themselves any chance of qualification, with the South Americans also losing their opener in surprising fashion to the Costa Ricans.