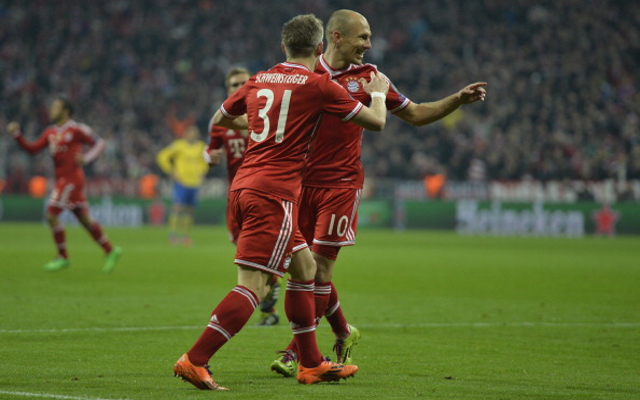 Man United boss Louis van Gaal is lining up bids for two of Bayern Munich’s top talents according to the Daily Mail.

The Dutch national team coach is, perhaps unsurprisingly, keen on luring winger Arjen Robben to Old Trafford and continues to pursue midfield maestro Bastian Schweinsteiger, two players who could provide an injection of real quality to a side in real need of an overhaul after a disastrous campaign under former manager David Moyes.

Though clearly neither player is a youthful prospect it is perhaps fair to say that both players are in the prime of their careers with Robben certainly enjoying a good run of form over the past couple of years.

Given the poor displays put in by the likes of Nani, Ashley Young and Luis Antonio Valencia last term a move for a quality winger like Robben would be a wise one to consider.

Man United lack a central midfield of real quality also so a move for Schweinsteiger also makes a great deal of sense as the German international is in a different league to the likes of Tom Cleverley, Marouane Fellaini and veteran performer Michael Carrick.