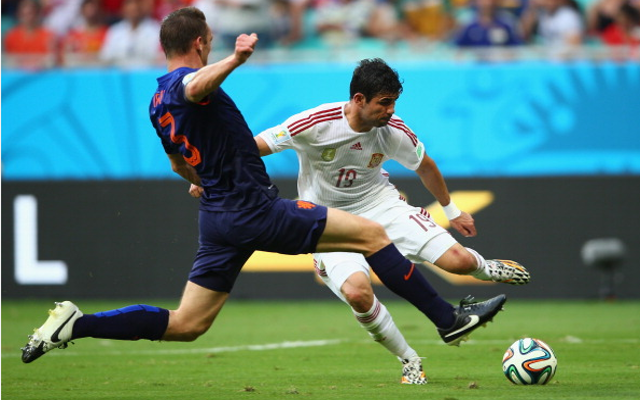 Incoming Chelsea signing Diego Costa has spoken of his delight at joining the Premier League side who he claims are one of the ‘world’s greatest clubs’ according to a report on Goal.com.

The 25 year old Brazilian born Spanish international will move to Stamford Bridge in a £35m deal following the completion of the World Cup and will certainly provide the Blues with an injection of genuine quality in the final third.

On his decision to join the Stamford Bridge side the Atletico Madrid has stated;

“I’ve wanted to play in the Premier League for a while. Chelsea are one of the greatest clubs of the world so there are many factors that make you take a decision like this.”

On the issue of adapting to life in the English top tier Costa added;

“I will have to work a lot to fit in with the style of the Premier League.”

Costa has also commented on the abuse he has received from Brazilian supporters, who have barracked the forward for his decision to turn his back on his country of birth in preference to lining up for Spain in the 2014 finals.

“In Spain it happens to me in every stadium I play so I’m pretty much accustomed to it,”

“I had my right of choice so it’s the same for the public, they have the right to choose to boo me. When you are on the pitch you don’t think about those things. I saw it coming, I knew it was going to happen so I had my head ready for that.”

Jose Mourinho saw his crop of strikers roundly fail to hit a consistent run of goal-scoring form last term and as such a move to sign Costa makes a great deal of sense.