Eleven stars of European football who may be available this summer as they have just twelve months to run on their contracts.

The deciding factor for many big transfers in European football is the fact that a player has just one year left on his contract, a position that puts their club in a difficult position. Either they could cash in, as Arsenal famously did with Robin van Persie, or hold on to him and risk losing their star on a free – as Borussia Dortmund did with Robert Lewandowski, who has joined Bundesliga rivals Bayern Munich this summer. These eleven players could all be on the move this summer unless they can agree a new deal with their respective employers. 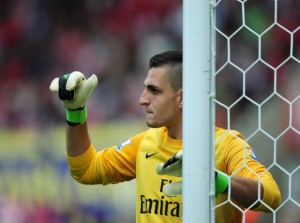 Sunderland goalkeeper Vito Mannone finally lived up to the potential that he had always had at Arsenal in the last twelve months, the Italian emerging as one of the key reasons for Sunderland’s impressive run to the League Cup final and dramatic escape from relegation. Gus Poyet has spoken of his desire to keep Mannone at the Stadium of Light beyond next summer, but with no talks until after the summer it is possible that the Italian’s head could be turned.