Manchester United striker Javier Hernandez sent gossip surrounding his future into overdrive this week when he was spotted wearing a Santos shirt on the beach.

Following El Tri’s impressive goalless draw with the hosts on Monday, the squad took to the beach to relax and recoup.

The squad were seen mingling with fans, one of whom handed a Santos shirt to Chicharito emblazoned with his favourite number 14 on the back.

Speculation surrounding Hernandez’s future has been rife recently, as he struggled for game time at Old Trafford last season, though it remains to be seen whether he will feature in Louis Van Gaal’s plans for the upcoming campaign. 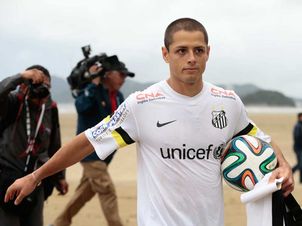