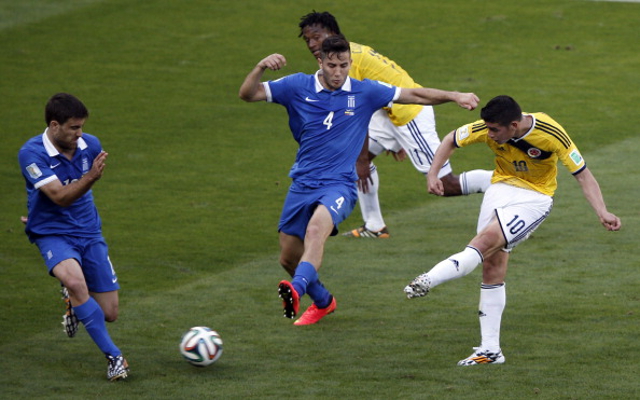 Can the favourites for the tournament be denied by one of these teams?

With the opening round of fixtures at the World Cup 2014 completed, there are five teams in particular who have shown enough to suggest that they could be capable of causing a shock in the coming weeks.

While the critics asked questions of Spain after their heavy defeat in their Group B opener, Brazil faced similar doubts after they were held to a goalless draw by Mexico.

Nevertheless, the two nations will still be confident of improving, and while Argentina were perhaps slow in getting off the mark in their first game, it appears as though Germany are the only team amongst the pre-tournament favourites to live up to their tag thus far after their 4-0 mauling of Portugal.

However, there are five teams that have shown promising signs in the first week of the tournament, and there is no reason why they can’t aim towards making the latter stages of the World Cup at the very least.

Despite losing Kevin Strootman prior to the tournament and having to deal with the circus surrounding Louis Van Gaal’s future with Manchester United, the Dutch got off to a flying start against Spain in the first game.

From Robin Van Persie’s brilliantly-taken opener to Arjen Robben’s searing pace causing problems for the Spanish back-line, it was a fantastic performance that they will hope to follow up on against Australia.

While they still perhaps lack the individual quality of old, Holland have match-winners in their team and will be a threat if their confidence continues to grow. A win against the Socceroos would all-but clinch their place in the knock0ut stages, and they will now be pushing to finish top of the table.

What was perhaps the most frustrating aspect of Colombia’s 3-0 win over Greece was the absence of Falcao, as they could have been a genuine contender for this tournament with their talismanic striker.

Nevertheless, with Juan Zuniga and Pablo Armero dashing forward from the full-back positions to support the likes of James Rodriguez and Juan Cuadrado, this is a side full of pace and direct running that could cause any team problems on their day.

Jackson Martinez will possibly come in for Victor Ibarbo who disappointed last time out, while Fredy Guarin will return from suspension to form a formidable looking team.

The Azzurri are rarely tipped for success in the big tournaments, but unsurprisingly they continue to quietly go about their business and find a way to win.

After the victory over England, Gianluigi Buffon, Mattia De Sciglio, Andrea Barzagli and Daniele De Rossi all re-joined the group in training after various ailments, and Cesare Prandelli’s squad is now looking strong and is full of belief even if they still acknowledge their limitations.

The former Fiorentina coach boasts arguably the strongest midfield trio in the tournament with De Rossi, Andrea Pirlo and Marco Verratti, and their ball retention and vision to unlock defences will continue to be key as Mario Balotelli will look to deliver as the lone striker.

Despite the loss to the Italians, England will be able to take a number of positives away from the 2-1 defeat, particularly considering the threat that they posed in attack.

While the debate rages on over where Wayne Rooney should play, the Manchester United star is reportedly set to be switched back into a more central role in the upcoming games, which should suit him and help England with more pace on the wings through Raheem Sterling and Danny Welbeck.

While they do face a crunch tie against Uruguay next, Roy Hodgson will feel confident that his side can hurt their rivals and set up a must-win game over Costa Rica to end the group phase.

The internal problems that blighted their campaign in South Africa are a thing of the past, as Didier Deschamps seemingly has all of his players singing from the same page.

Les Bleus have a solid base to work from provided by Mamadou Sakho and Raphael Varane, while Paul Pogba will emerge as a star of this tournament if he is given the opportunity to progress beyond the group stages.

Further afield, Mathieu Valbuena is one of the most exciting players to watch with the ball at his feet, and Karim Benzema got off to a perfect goal-scoring start as the French will need him to fire them to glory. While they are still very much an outside bet to win the tournament, France can be a threat if they continue to focus on their football.