Check out this XI of players who are believed to be signing new deals with their clubs this summer.

Sometimes the only way for a player to end any speculation surrounding their future is to put pen to paper on a new deal with their current club. This XI of players have done just that, either agreeing or being set to agree new contracts with their clubs, either to commit their future to their current employer or to end any lingering transfer rumours that had been surrounding them. 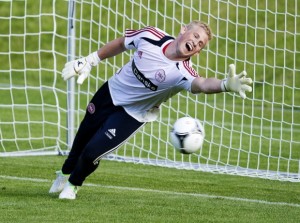 Leicester City goalkeeper Kasper Schmeichel put pen to paper on a new four-year deal with the newly promoted Premier League club to end speculation linking him with a move to teams such as Serie A giants AC Milan. The Danish international and son of Manchester United legend Peter joined the Foxes from Leeds United when they were under the management of Sven Goran Eriksson and has gone on to establish himself as a firm fans’ favourite at the King Power Stadium.