These seven World Cup stars are all available on free transfers this summer.

It is often said that managers should not base transfer decisions based on the World Cup, with many expensive deals put together on the basis of a player’s performances on the biggest stage having proven to be unwise at best. There are bargains to be had, however, such as this group of 2014 World Cup stars, all of whom are available on free transfers this summer. 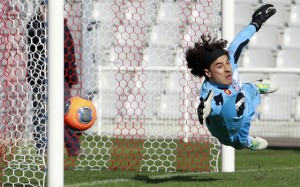 Mexican goalkeeper Guillermo Ochoa shot to prominence after his display against Brazil in the Selecao’s second game of their own World Cup, with the 28 year-old proving to be a one-man barrier between the Brazilian side and the goal. Ochoa also enjoyed an impressive season at club level, although he was unable to prevent AC Ajaccio’s relegation from Ligue 1, and would surely prove to be a wise investment for any club, including Liverpool and Arsenal, looking to strengthen their goalkeeping position this summer.