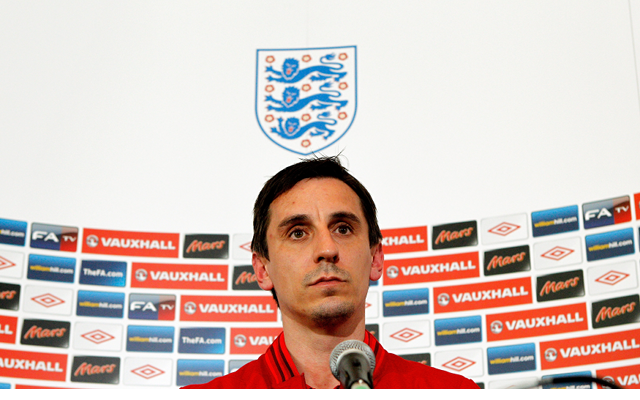 Gary Neville has emerged as the bookies shock favourite to take over the reins from Roy Hodgson as England manager after widespread gossip suggested that he would be sacked following a dismal World Cup campaign, according to the Metro.

The Three Lions are on the verge of an early flight home after losing to both Italy and Uruguay in their first two games of the World Cup, which has put Hodgson’s position under threat.

He batted off questions about his future after the 2-1 defeat to Uruguay, but bookmakers have cut odds on his sacking to 9/4 – and bets are flooding in on his replacement.

And Hodgson’s assistant, Neville, has now been installed as the favourite to take over the role despite never managing before with William Hill placing him as the 8/1 favourite to land the job in time for England’s Euro 2016 campaign.

QPR boss Harry Redknapp is the second favourite at 10/1, while Jose Mourinho is the third choice at 12/1.

But it appears that Neville is the man that bookies are turning to to change the fortunes of the national side after disappointing so heavily on the world stage.