Fans vent their frustration on Twitter as Valencia signing is not the news they wanted.

Manchester United fans were not exactly thrilled when the club announced that winger Antonio Valencia had signed a new three-year contract at Old Trafford on Saturday morning.

United spread the news using their official Twitter account and the first six respondents were rather annoyed. Please stop reading if you are offended by foul language.

Some fans seemed frustrated that Valencia, who is currently at the FIFA World Cup with Ecuador, was staying at United, while some were just upset that the tweet was not announcing the arrival of a new player.

We had to crop the comments because one social media user went and dropped the C-bomb further down the feed. 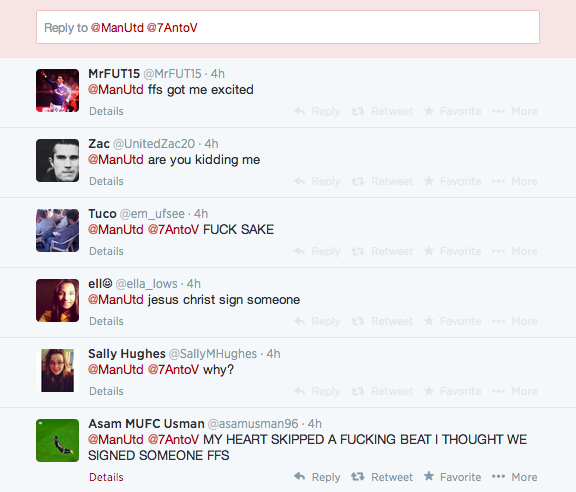 The 28-year-old, who will celebrate his 29th birthday in August, cost around £16m.

He has made 191 first-team appearances for the Red Devils, scoring 20 goals.

Valencia played the full 90 minutes on Friday night as Ecuador came from behind to beat Honduras 2-1 in Curitiba.