Check out the five stars of the Oranje that new manager Louis van Gaal could bring to Old Trafford this summer.

New Manchester United manager Louis van Gaal will take up his position at Old Trafford as soon as his 2014 FIFA World Cup campaign with The Netherlands ends, with the transfer rumour mill suggesting that van Gaal is interested in bringing a number of the Oranje’s stars with him. The fact that the Dutch have been so impressive in the tournament so far, vanquishing reigning champions Spain as well as Australia, means that United fans are sure to be excited at the prospect of these names arriving at Old Trafford in the transfer window. 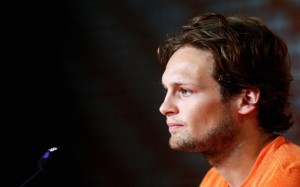 Despite Robin van Persie and Arjen Robben scoring the goals, it was arguably Ajax wing back Daley Blind who was the star of Holland’s stunning 5-1 victory over Spain in their opening World Cup match. The 24 year-old was solid defensively and caused havoc going forward from van Gaal’s five-man defence, lifting a delightful chipped through ball over the Spain defence to allow van Persie to equalise with a diving header just before half-time. Blind has already been linked with a summer move to Old Trafford as the Reds look to replace Patrice Evra at left back.