These South American talents who are strutting their stuff at the 2014 FIFA World Cup could all be heading to the Premier League this summer.

With the 2014 FIFA World Cup being held in Brazil, it is unsurprising that South American plays and teams have dominated the tournament so far, with the hosts, Argentina, Chile and Colombia all impressing so far and Uruguay and Ecuador both still harbouring hopes of qualification from their groups. Every World Cup seems to start a scramble to snap up its most impressive players and 2014 should be no different, with these seven South American stars already rumoured to be attracting the attentions of Premier League clubs. 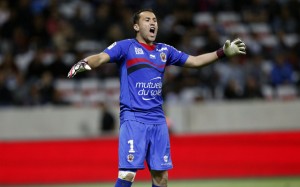 Colombian first choice goalkeeper has been linked with Arsenal this summer, and his displays so far for a team who have won both of their games at the tournament will have done nothing to dissuade Arsene Wenger from pursuing the OGC Nice stopper.

Ospina has impressed with his performances in Ligue 1 for a prolonged spell on the French Riviera and he looks set to make a significant step up this summer.