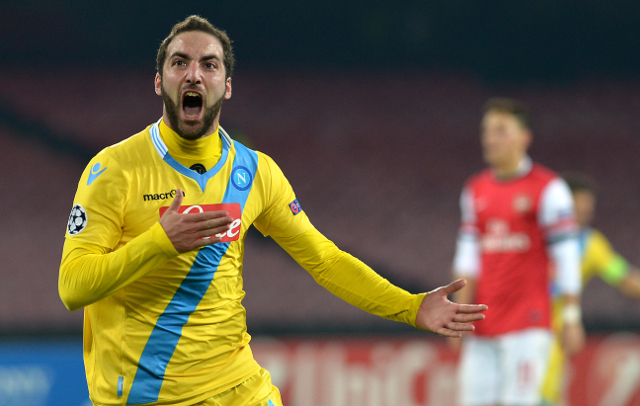 Striker edging closer to Barcelona move.Barcelona and Napoli could be set to negotiate a transfer fee for a deal that will see former Real Madrid striker Gonzalo Higuain move to the Nou Camp this summer, according to Fichajes.net.

The Argentine international is currently on World Cup duty with his country, but is said to have agreed personal terms to join Barcelona in principle, with the two clubs now needing to agree on a price for his move back to the Spanish top flight.

The 26-year-old only moved to the Stadio San Paolo last summer after seven years at the Bernabeu, and would be something of a controversial signing for Barca given his Madrid connections.

Still, there’s no doubt that Higuain, who scored 24 goals in 2013/14, would make a top class addition for new manager Luis Enrique, who has been tasked with rebuilding a struggling Barcelona squad after they finished trophyless this season.

Higuain’s desire to play with his fellow countryman Lionel Messi looks to have helped push through a move for him to return to La Liga, although it remains to be seen if the outcome of a possible move for Liverpool star Luis Suarez will affect the outcome of this deal.

The Uruguay striker has also been linked as a big-money target for the Catalan giants, and it seems unlikely that the club would need to sign both players in the same transfer window.