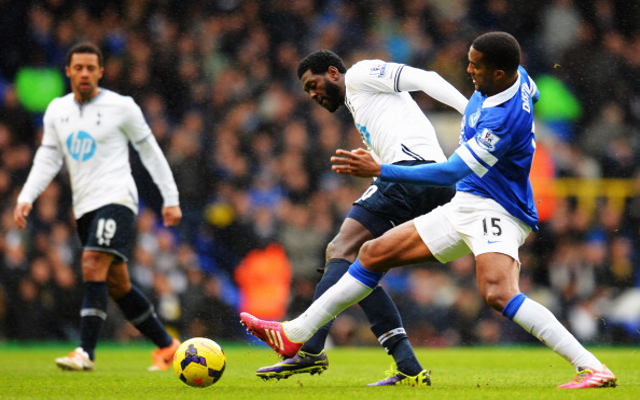 AC Milan are set to make an enquiry over the availability of Tottenham Hotspur striker Emmanuel Adebayor as they prepare to sell star player Mario Balotelli to Arsenal, CaughtOffside understands.

The Italian giants will be in need of new signings upfront this summer as Balotelli closes in on a £27m move to the Emirates Stadium, just a year and a half after moving to the San Siro from Manchester City.

Although Balotelli has performed well at Milan, scoring 30 goals in 54 appearances for the Rossoneri, his disciplinary problems remain something of a concern for the club, who are willing to let him leave for the right price this summer, which has led to a strong interest from Arsenal who now appear to be close to finalising a deal to bring him to north London.

This will see Milan enter the market for one or more new signings upfront, and it is believed that Tottenham’s Adebayor is one of their main targets for this transfer window, with the club having looked at the Togo international several times in the past.

The 30-year-old has not had the best run of form at White Hart Lane in recent times, and could be sold for the right price this summer as the club look to make changes under new manager Mauricio Pochettino, which has tempted Milan as they sense an opportunity to potentially land him on the cheap.

On his day, Adebayor can be one of the most dominant centre-forwards in the Premier League, using his pace, physique and finishing ability to good effect to make himself a nightmare for opposition defenders, though he has struggled for consistency throughout his career.

After seeming to grow stale at Spurs, a move to a new club and a new league could be ideal for Adebayor right now, and the slower pace of the game in Italy could also prove beneficial to him at this point in his career.

Milan will also consider moves for two other Premier League-based strikers, with Chelsea youngster Romelu Lukaku also an option, though he may prove too expensive, along with Southampton flop Dani Osvaldo, who is being linked with a number of Serie A clubs.

New manager Filippo Inzaghi has a tough task ahead of him at Milan next season, but has been keen to get his transfer business done early, having already snapped up Paris Saint-Germain winger Jeremy Menez on a free transfer.