With Liverpool’s proposed transfer move for Sevilla left-back Alberto Moreno hanging firmly in the balance, Reds’ manager Brendan Rodgers will no doubt be watching on with interest during this summer’s World Cup, keen to scout out potential alternatives that could help to strengthen his teams leaky defence. Here are five possible options that are currently on international duty in Brazil: 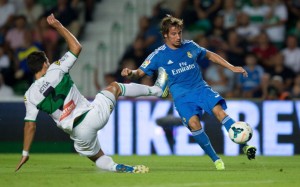 The 26-year-old attacking full-back is currently at the World Cup with Portugal. He has struggled in a Real Madrid shirt, and has made just 46 league appearances since joining from Benfica in 2011.

He was strongly linked with a move to Manchester United last summer, but with Louis van Gaal having secured current left back Patrice Evra for a further year, and with Luke Shaw still very much on the Old Trafford club’s radar, Coentrao could well be available. The Portuguese full back regularly struggled to displace Brazilian defender Marcelo in the Real team, and he could be keen on a move that ensures him more first team football.