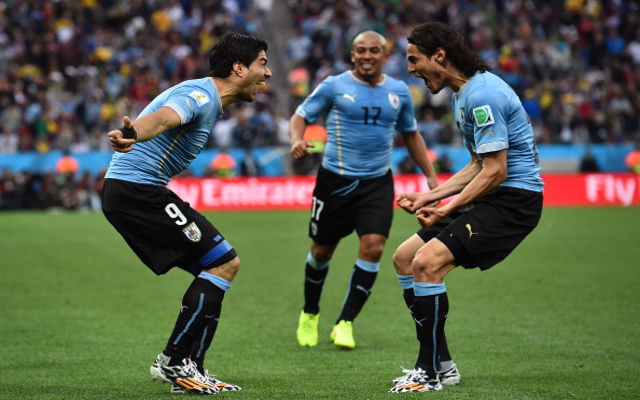 Anfield side look to replace one Uruguayan with another.

CaughtOffside understands that the Anfield side will conduct a thorough investigation of Suarez’s behaviour after it appears the striker has once again sullied his reputation by biting Italian defender Giorgio Chiellini during yesterday’s World Cup clash.

The club’s American owners are not willing to stand by the 27 year old and if he is hit with a FIFA ban then they will actively look to sell the former Ajax man and will put funds from such a sale towards a bid for his national team colleague Cavani.

The Parc des Prince star is known to be unsettled in the French capital and Liverpool will offer PSG a chance to recoup the £52m they invested in the powerful marksman a year ago.

Cavani is unhappy with his position at PSG, where he plays second fiddle to Swedish international Zlatan Ibrahimovic, and Laurent Blanc’s insistence on playing him in a wide attacking role and Liverpool are ready to offer the 27 year old guarantees of a central role that could tempt the former Napoli man to moving to the Merseyside club.

Rodgers feels that Cavani could be as bit a hit as Suarez in the Premier League, where his physical presence could be well suited to life in the English top tier.

Cavani netted 25 goals in all competitions last season and scored an astonishing 104 goals in three seasons at the San Paolo before his Naples side chose to cash-in on his services.

Liverpool are ready to stump up £52m for Cavani knowing that the cost of such a move would be more than covered by Suarez’s sale to either Real Madrid or Barcelona.