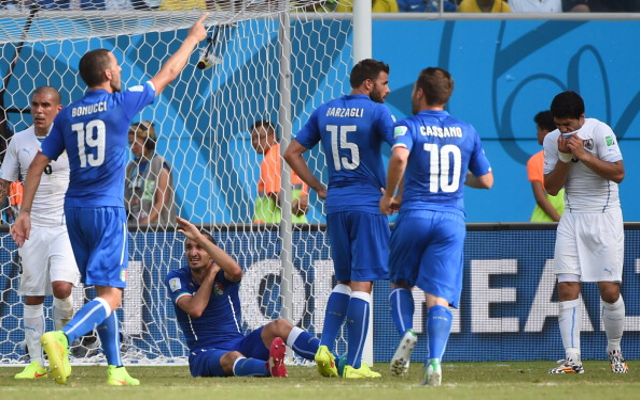 Luis Suarez could be hit with an astonishing two year worldwide ban from the game after yet another biting incident involving the Uruguayan international according to the Daily Mirror.

The 27 year old has already served two suspensions for previous biting incidents during his time at Ajax and Liverpool and last night appeared to bite Italian international Giorgio Chiellini, who then displays what may well be teeth marks around his shoulder area.

Uruguay scored a crucial winner minutes later to see the South Americans through to the knockout stages of the World Cup though Suarez’s involvement in the tournament may well be at an end.

“I have watched the incident several times on television. There is no doubt Luis Suarez is a fantastic footballer but, once again, his actions have left him open to severe criticism.

“FIFA must investigate the incident seriously and take whatever disciplinary action deemed necessary.”

FIFA’s disciplinary code sets a maximum ban of 24 matches or two years and such a term may be handed to Suarez given his repeat offences, though whether such a ban would include club matches is unclear.

If such a ban does cover his involvement at club level then one wonders if Liverpool may choose to sell the forward after yet another unsavoury incident.

This comes after Suarez’s superb Premier League campaign during which he netted 31 goals and won a host of personal accolades whilst guiding his Anfield side back into the Champions League.