Will Luis Suarez ever learn from his mistakes…

Luis Suarez was at it again on Tuesday, appearing to bite opposing defender Giorgio Chiellini during Uruguay’s 1-0 World Cup victory over Italy.

The incident was the third time the Liverpool striker has been accused of biting an opposition player during his career, and his actions are likely to bring about a lengthy ban.

But is he the most controversial player to have ever played in the English Premier League? Here’s a look at the top five candidates:

Be it as a player, or a manager, it’s hard to keep the Italian quiet. In 1998, he received an eleven match ban for pushing a referee, while in his time with Lazio he received negative publicity for his alleged fascist salute, as well as his relationship with the club ‘ultras’.

He lasted just 13 games as manager of Sunderland last year, although he did manage a memorable win over local-rivals Newcastle United. 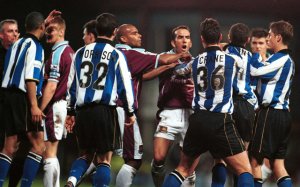