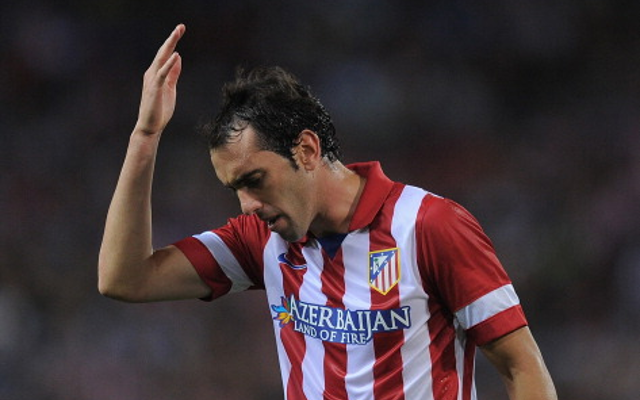 Defender to be offered new contract.Atletico Madrid will look to fight off interest in Diego Godin by offering the Chelsea and Manchester United target a new contract after the World Cup, according to the Daily Express.

The commanding centre-back had a superb season for Atletico as they won La Liga and reached the Champions League final, with Godin scoring decisive goals from the back along the way.

The 28-year-old has also been in good form for Uruguay at this summer’s World Cup, scoring another vital goal as he helped his country to a 1-0 win over Italy to send them through to the knockout stages of the competition.

His displays have seen a number of top clubs around Europe take notice, with United possibly set to target him as an alternative to his team-mate and defensive partner Miranda, whom they have struggled to make progress in signing so far.

Chelsea and Liverpool are also mentioned as possible suitors for Godin, with both clubs in the market for big-name signings in defence this summer, but he remains a vitally important player to Atletico, who have already lost one of their stars to Jose Mourinho’s side.

Diego Costa’s £32m move to Stamford Bridge is expected to go through, while Brazilian left-back Filipe Luis has also been strongly linked with the Blues, but Atletico boss Diego Simeone will be desperate to keep the rest of his title-winning squad together.