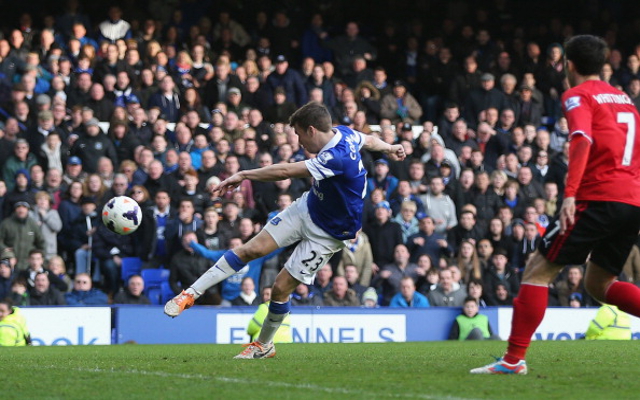 Everton confirm that right back Seamus Coleman has ended speculation surrounding his future by signing a new five-year contract extension.

Reported Arsenal target Seamus Coleman has ended speculation surrounding his future by signing a new five-year contract extension at Everton, a deal that will keep the Irishman at Goodison Park through his prime years as a footballer.

The 25 year-old has made more than 100 Premier League appearances for Everton since joining the club for a five-figure fee from Sligo Rovers in 2009, establishing himself as a first team regular following a short loan spell at Blackpool.

Coleman really came into his own in the last twelve months, however, emerging as possibly the division’s finest right back having been given the freedom to burst forward in Roberto Martinez’s adventurous system.

Despite being linked with Arsenal this summer, Coleman claims that his heart was always at Goodison Park:

“With how much I love playing at Everton, I was delighted to get the chance to sign another contract.”

“With the manager and some of the players we have, we’re going to the right places.”

Coleman is following the example of his manager, Martinez, who also signed a five-year extension to his deal this month after a fine first season at Goodison Park saw the Toffees in contention for Champions League qualification for much of the season.

Keeping Coleman at the club represents a fine piece of business for Martinez and chairman Bill Kenwright, who will now hope to bring new signings in to take the club forward after extending contracts including those of Coleman, Sylvain Distin and Tim Howard in recent weeks.