A tournament full of great goals and great controversy…

World Cup 2014 has had it all. A tournament to remember for some, a tournament to forget for many others. Here’s a look at the top ten most controversial moments of the World Cup so far:

10) Diego Costa – booed for being a traitor

Soon to be Chelsea striker Diego Costa, who has had a World Cup to forget with Spain, was booed by Brazilian fans throughout the tournament – following his switch in national allegiances earlier this year. 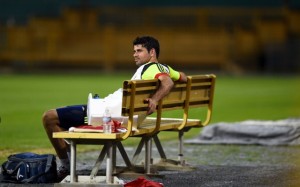