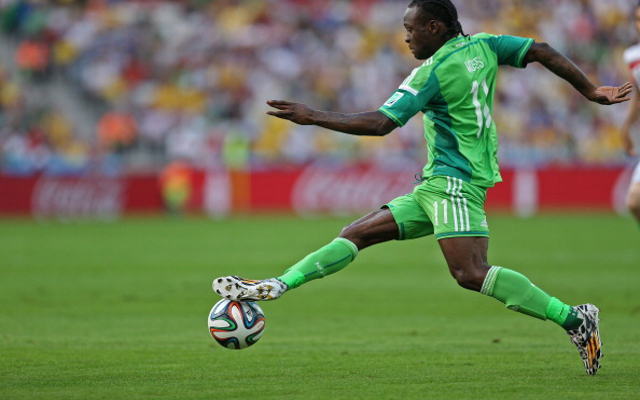 Goodison Park side look to bring in Stamford Bridge wide-man.

Everton are reportedly leading the chase to sign unwanted Chelsea winger Victor Moses according to TuttoMercato.

The 23 year old wide-man spent last season on loan at Liverpool but seemingly did not sufficiently impress Brendan Rodgers to earn a permanent Anfield switch and now Roberto Martinez will look to bring the Nigerian international in to strengthen his Toffees side.

Moses scored just twice in 22 appearances for Liverpool and would appear way down Jose Mourinho’s Chelsea pecking order with the likes of Eden Hazard, Mohamed Salah, Andre Schurrle and Brazilian Lucas Piazon all ahead of the former Crystal Palace and Wigan man and a move away from the west London side is perhaps in the interest of all concerned.

Moses is currently away on World Cup duty and could be tempted by a move to a resurgent Everton side who have qualified for Europa League action in 2014/15.

Martinez’s success last term was built largely on loaned in talents with the likes of Romuelu Lukaku, Gareth Barry and Gerard Deulofeu all playing their part in the club’s fifth place finish, and as such the Spanish boss will be keen to bring in permanent additions to help his side build on the successes of last season.

West Brom, Southampton and Newcastle United are also said to be keen on Moses.