Arsenal are closing in on deals to sign Real Madrid duo Angel di Maria and Alvaro Morata after meeting the La Liga side’s respective valuations of the attacking duo.

CaughtOffside understands that Arsene Wenger has been pushing to land the two Bernabeu talents for some weeks and ongoing negotiations have led to the Spanish giants demanding €60m (£48m) for the pair, a fee that the north London side are ready to fork out.

Argentine winger Angel di Maria is a long term Wenger target and the 26 year old’s future at Real Madrid is uncertain to say the least.

The former Benfica man played something of a lesser role last term with the arrival of Gareth Bale leading to the wide-man playing a more limited role in first team matters, though di Maria did still finish the season as the club’s leading assist maker.

Carlo Ancelotti is ready to listen to offers for the wiry flair player as he seeks to bring in further attacking additions, with Real Madrid still intent on signing disgraced Liverpool and Uruguay striker Luis Suarez, a move that will require the Italian to sell one or two key players to help fund a bid in excess of £70m.

Arsene Wenger is keen to bring in further wide-attacking options not least because of ongoing injury concerns over Theo Walcott but also with a view to selling either, or even both, Santi Cazorla and Lukas Podolski.

Spaniard Cazorla had an average second season at the Emirates Stadium and is said to be homesick whilst Podolski has failed to deliver over the course of his two years at the club. 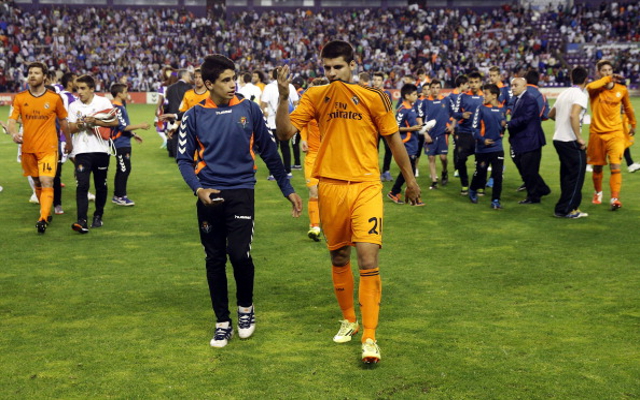 Wenger is also looking to land Spanish Under 21 international Morata as a player who can boost his current striking options as well as being very much a star of the future at the Premier League side.

Morata is a player of obvious talent who has struggled to retain a foothold in the Real Madrid starting eleven, the 21 year old starting just three La Liga fixtures in 2013/14 though still managing to weigh in with eight goals.

Though having agreed a price for the pair Arsenal must now convince the two players to sign contracts this summer and Wenger will be well aware that the likes of AS Monaco and Juventus are both tracking di Maria whilst Tottenham are said to be interested in bringing in Morata.