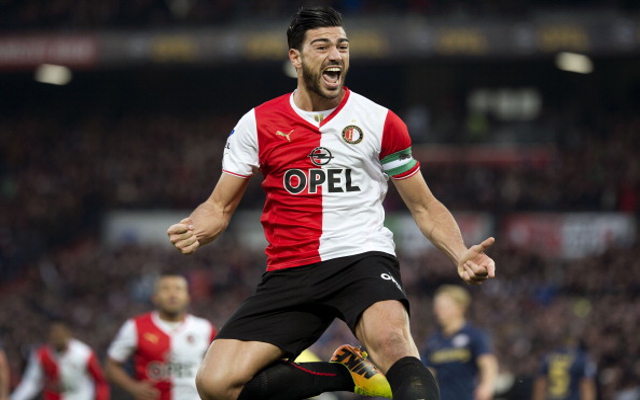 The Saints are hoping to finalise the £8 million signing of Feyenoord striker Graziano Pelle.

Southampton have cash burning a hole in their pocket after the sale of Luke Shaw to Manchester United and imminent departure of Adam Lallana to Liverpool, with the Saints hoping to use some of it to confirm an £8 million deal for Feyenoord striker Graziano Pelle, according to the Daily Mail.

The 28 year-old Italian has a stunning goalscoring record in the Eredivisie since joining from Serie A side Parma, making him the latest in a long line of prolific strikers to be lucked from the Dutch league.

With Rickie Lambert also having left St Mary’s this summer, Ronald Koeman is likely to be in the market for an imposing centre forward, a job for which former AZ Alkmaar man Pelle certainly fits the bill.

The 6ft 4in striker is said to have significant wage demands, but could be persuaded to lower them for the right move, such as a reunion with his former manager Koeman.

The former Barcelona boss has a job on his hands on the South Coast this summer, but is likely to have plenty of money to replace Lambert, Lallana, Shaw and possibly centre back Dejan Lovren.

Pelle, who has also been linked with newly promoted Leicester City, would represent an excellent start to his summer business if, in Eredivisie striker terms, he turns out to be more of a Luis Suarez than an Afonso Alves.