CaughtOffside looks at the possible alternatives for Brendan Rodgers, rather than £10m Lille forward Divock Origi.

Liverpool look set to complete a deal for young Belgian forward Divock Origi, with reports suggesting that the Reds are set to pay a fee in the region of £10 million for the teenage sensation from Ligue 1 club Lille.

Origi, a modern hybrid forward who can both lead the line and operate from deeper and wider areas, is undoubtedly a fine young talent, but he is not the only teenage striker to be raising eyebrows in Europe.

Here at CaughtOffside, we aren’t totally convinced by Origi’s credentials as the finest young attacker that Liverpool could have moved in for, with these five alternatives possibly ones that Brendan Rodgers should’ve given more serious consideration to. 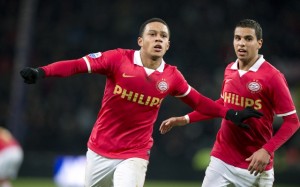 Young PSV Eindhoven wide forward Memphis Depay has already made a huge impression on the 2014 FIFA World Cup, picking up a couple of goals for a Netherlands side who dominated a tricky group including Spain and Chile.

The 20 year-old is coming off the back of a fine season with Eredivisie side PSV Eindhoven, for whom Depay has already made 60 league appearances and notched up 17 goals despite his tender age.

Depay’s goals record is incomparable with the meagre return from Origi in Ligue 1, despite both players operating in similar areas of the pitch, whilst he would be likely to command a smaller fee than the Belgian.