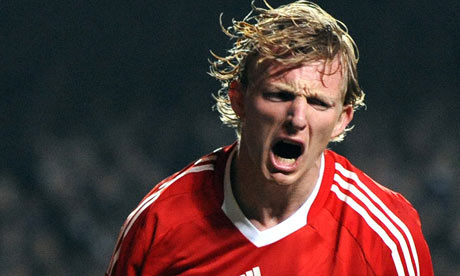 According to reports emerging from the Mail, new Manchester United manager Louis van Gaal could be sizing up a shock move to bring former Liverpool cult hero Dirk Kuyt to the club after the pair’s World Cup campaign with The Netherlands has drawn to a close.

Were it to come to fruition, the signing would be one of the most bizarre of the summer, with Kuyt’s lack of genuine quality being apparent when he was in his prime, with the former Feyenoord man now approaching his 34th birthday.

Kuyt has been turning out for Fenerbahce since leaving Liverpool in 2012, scoring 18 goals in the Turkish League for the Istanbul club over two seasons.

Whilst a move for Kuyt would, on the surface of it, seem unlikely, however, van Gaal is known to trust Kuyt implicitly and he is also a huge fan of the relentless energy and work rate that Kuyt is able to bring to a team.

His versatility is also a bonus, with Kuyt even being deployed as a left wing-back during Holland’s final group stage victory over Chile at the 2014 FIFA World Cup.

Whatever the merits of Kuyt as a player, however, the move would be a huge blow to Liverpool supporters, who came to love the Dutchman whilst he wore their badge due to the sheer commitment that Kuyt was able to display on the pitch.