Brendan Rodgers is looking for defensive reinforcements this summer…

Where are Liverpool’s defensive reinforcements? Much has been made of the costly 50 Premier League goals the Reds conceded last season, but little seems to be being done about it.

So far this summer, Liverpool have signed striker Rickie Lambert from Southampton and midfielder Emre Can from Bayer Leverkusen. They are also believed to be closing in on two more attacking-minded players: Adam Lallana and Divock Origi. If Luis Suarez does move on, the Reds are likely to turn their attention to the likes of Xherdan Shaqiri, Lazar Markovic and Alexis Sanchez.

While that list of signings and targets makes for extremely exciting reading for the Anfield faithful, it’s worth remembering that Liverpool had little trouble scoring goals last season, even during the first-part of the season when Suarez was suspended. Daniel Sturridge, Raheem Sterling and Phillipe Coutinho all provide wonderful attacking options, and manager Brendan Rodgers looks well-set to add to that group before the start of the new season.

But with a failed bid for Sevilla full-back Alberto Moreno and a declining interest in Arsenal-bound Dejan Lovren the only defensive deals in the transfer pipeline, should the Reds be doing more to strengthen their back line? Here are five centre backs that could do just that:

This 27-year-old Moroccan international joined Roma from Udiense last summer, and impressed in his side’s impressive campaign, which saw them finish second behind Juventus in Serie A. The French-born defender scored five goals in 33 league appearances last season. Known for his strong levels of concentration which lead to a high number of interceptions, he could be an excellent addition to the Liverpool defence. 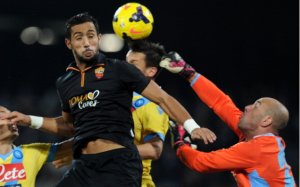