Who will be next season’s Premier League top goalscorer…

Whether Luis Suarez stays or goes, will any Premier League striker be able to eclipse the 31 goals the Uruguayan struck for Liverpool last season. Here is a look at the top five golden boot contenders.

This 25-year-old Spanish striker has been on the verge of signing for Chelsea for some time. Assuming the move does come off, Costa could prove a key man at Stamford Bridge, and will likely shoulder the burden of leading the line for Jose Mourinho’s new look team. With the prospect of Eden Hazard, Oscar, Willian and Cesc Fabregas amongst a host of attacking players likely to be offering him support, surely the Brazilian-born forward will continue the form that saw him score 36 goals for Atletico Madrid last season. 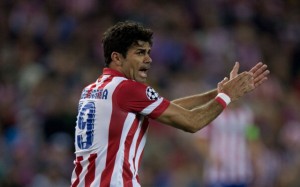