Emirates Stadium side have deal agreed ‘in principle’ as Wenger seeks to conduct an overhaul of his Gunners attack.

Arsenal are edging closer to completing a stunning move to bring in Real Madrid duo Karim Benzema and Angel di Maria as part of an overhaul of the Gunners attack.

CaughtOffside understands that the Bernabeu side are in advanced stages of moves to bring in new additions that would leave both Benzema and di Maria struggling for regular first team action and the club’s president Florentino Perez is keen to balance the costs of such signings by selling the pair.

A move to sell 26 year old French international Benzema is especially pressing as the former Lyon man’s contract runs out in a year and the powerful striker has demanded to have his €4.5m a year salary doubled before he’ll consider signing a a new deal, hastening the La Liga side’s desire to cash in on his services this summer.

Arsene Wenger is known to be a long term admirer of the Real Madrid star and is keen to bring in the forward to strengthen his attack, so much so that he is willing to bring an end to his pursuit of QPR striker Loic Remy in order to focus his efforts on signing Benzema.

Benzema greatly benefited from the sale of Gonzalo Higuain to Napoli last July as it left a clear run at a regular first team berth and Real Madrid boss Carlo Ancelotti showed faith in the strong marksman who in turn weighed in with a 24 goal haul. 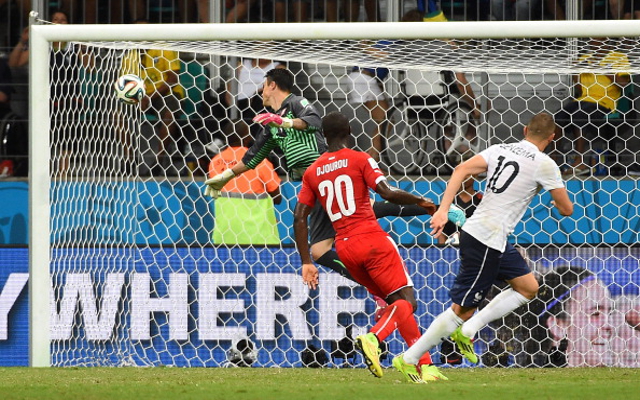 Karim Benzema’s club form has also led to a marked improvement at national team level, where his form had been questioned, and an excellent World Cup showing has further solidified Wenger’s interest in acquiring the Real Madrid man.

Real Madrid’s very public designs on a fresh striker signing will perhaps serve as motivation for Benzema to seek an exit.

Arsenal’s interest in 26 year old Argentine Angel di Maria is less long running but a move to bring in strong wide-attacking options has been fueled by injury concerns and general fitness concerns over both Lukas Podolski and Theo Walcott, which led to the pair managing just 23 Premier League starts between them last season.

There is also talk of a possible summer exit for pint-sized fan favourite Santi Cazorla who is rumoured to be pining for a return to his native Spain. It’s a sale Wenger wouldn’t have considered a year ago but the former Malaga man put in a fairly average series of displays last term and could now be a player the Arsenal manager is willing to sell in order to make room for new signings.

Di Maria saw his first team spot hindered to a degree by the arrival of Gareth Bale from Tottenham last summer and Ancelotti’s interest in Colombian youngster James Rodriguez is further evidence of the former Benfica man’s lessening role in the club’s long term plans.

Di Maria is said to fell undervalued by Real Madrid, and the club’s supporters, which may be the reason behind the player’s ill-advised obscene gesture aimed at the fans mid-way through last season.

Even in a ‘lesser’ role the former Benfica man finished the 2013/14 campaign as the club’s leading assist maker but even his man of the match display in the Champions League final win over city rivals Atletico doesn’t appear to have stemmed talk of a likely summer exit.

Real Madrid had been looking to make as much as £40m from the sale of each of their attackers but are ready to accept a combined €90m (£71m) deal for the pair and that’s a fee Arsenal are ready to pay.

The Spanish giants will not accept the offer until they have successfully acquired Rodriguez and Falcao but both di Maria and Benzema are thought to both be open to a move to north London.

In turn the double capture will not only lead to a likely sale of Cazorla back to a La Liga side but it would more than likely lead to Lukas Podolski making a similar return to the Bundesliga.

Arsene Wenger appears ready to begin his summer spending having all but secured a deal to sign Newcastle United right-back Mathieu Debuchy, a move that will be officially confirmed once the French international’s involvement in the World Cup is complete.