With reports emerging that Manchester United are set to secure their third major summer signing in the near future, that of Feyenoord and Holland centre back Stefan de Vrij, CaughtOffside decided to peruse the potential partners for the Netherlands international that Louis van Gaal could persue.

With Nemanja Vidic and Rio Ferdinand both having departed Old Trafford on free transfers this summer, United fans will be hoping that van Gaal has another central defender up his metaphorical sleeve, with neither Phil Jones nor Chris Smalling having truly convinced in that role.

If De Vrij is signed, sealed and delivered then it represents a useful continuation of van Gaal’s rebuilding job, alongside teenager Luke Shaw, but more is certainly going to be required. 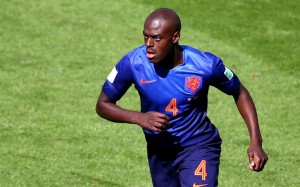 One logical signing for United would be de Vrij’s clubmate Bruno Martins Indi, with the two having formed a very useful partnership together for Feyenoord in the Eredivisie.

As another youthful centre back, Martins Indi would also give United the bonus of having two young defenders who can form an impressive long term partnership for both club and country.

The Red Devils have been linked with Martins Indi and, with Louis van Gaal trusting both to play in his three-man defence for the Oranje, it could well be a goer.