Barcelona’s Chilean forward Alexis Sanchez has been heavily linked with a move to both Arsenal and Liverpool this summer. Liverpool are thought to be demanding Sanchez be part of any deal that takes Luis Suarez to the Nou Camp, while the player himself is thought to prefer a move to the Emirates Stadium.

Either way, it looks likely that the 25-year-old could be on his way to the Premier League before the new season kicks-off in August. Such a move will be another great moment for the star attacker, who hugely impressed at the 2014 FIFA World Cup. Here is a look at his career so far:

Sanchez Joins Udinese As A Teenager…

After starting his career with Cobreloa, Colo-Colo and River Plate, a 19-year-old Sanchez moved to Italian side Udinese is 2008, two years after making his international debut. After a difficult start to life in Europe, Sanchez became a key player for Udinese as they advanced to the semi-finals of the Coppa Italia in 2010.

The following year, he scored four goals in the 7-0 win over Palermo, despite playing only the opening 52 minutes of the game – breaking the record of goals scored by a Chilean player in a single match in Serie A. He struck up a destructive partnership with Antonio Di Natale, as the pair netted 39 goals between them. 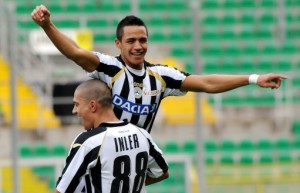