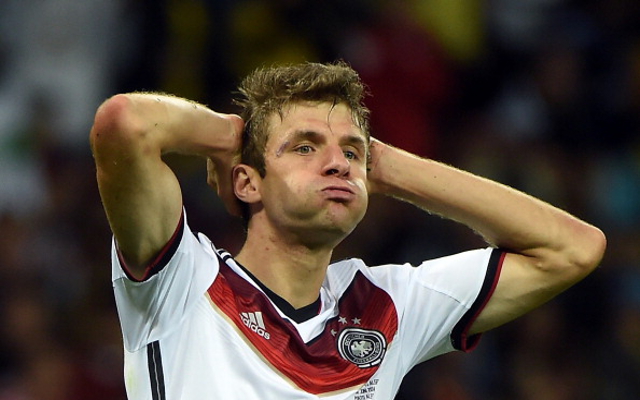 German forward Thomas Muller will be dismissed in most conversations about the contenders for the Golden Ball award at the World Cup this summer, but leaving the Bayern Munich player out of the picture would be entirely unfair. Just one goal behind James Rodriguez in the race for the top scorer award and having done more than anyone to drag Germany to the quarter finals, Muller deserves as much respect as other contenders with more exotic names and trendy haircuts.

Why Thomas Muller should win the Golden Ball

Muller is a genuine contender for the most intelligent and versatile football in the competition, as his displays in Joachim Low’s often slightly muddled Germany system will attest. Whilst players who, on the face of it, are technically superior to Muller – the likes of Mesut Ozil and Mario Gotze – often struggle to make a consistent impact in Low’s extremely fluid formation, Muller has the tactical intelligence to interpret his role perfectly.

When Germany find the moment to play the final pass or to deliver a cross into the box, Muller always seems to be there, offering the focal point necessary as the lone striker. When the ball, as it inevitably seems to, falls to him, he rarely misses and is one of the most clinical finishers in football. But, Muller offers so much more – he is willing to chase back and win the ball off the opposition, whilst he also drifts out to the right flank and into the pockets of space created when either Ozil or Gotze break forward as the most advanced player.

His hat-trick against Portugal and fine winning goal against USA were crucial to Germany’s passage through the group stages and, despite not scoring against Algeria, he was once again one of Low’s key performers, with his movement helping to eventually grind down the Algerian defence. Giving the Golden Ball to Muller would be a triumph for intelligence and efficiency.

Put quite simply – he isn’t cool enough. Even if Germany go on to win the tournament, I would still wager money on the award being given to one of his trendier teammates, perhaps Gotze or Ozil, or even which one of Arjen Robben and Lionel Messi that his team would be likely to have to beat in the final.

Sadly, the attributes that define Muller as one of the world’s finest footballers are not sexy – movement, finishing, consistency. He suffers from the same marginalisation that defenders do. Just as no centre back will be deemed as exciting enough to be considered for the Golden Ball, neither will Muller.

This is a shame, but it some ways it helps add to Muller’s allure as the unfashionable but destructive forward with the floppy hair, gangly gait and boring name. He is the anti-Neymar – it’s hard to see his imagine on a billboard on the Copacabana selling anything apart from perhaps a functional German hatchback. With this in mind, it’d probably be just wrong to give him the award.