How we expect Brazil to lineup for their crucial World Cup quarter final against Colombia this evening.

The hopes and dreams of the Brazilian nation once again lie on the shoulders of the Selecao today, as Luiz Felipe Scolari’s men take on Colombia in the second 2014 FIFA World Cup quarter final.

The Colombians have been one of the tournament’s most entertaining teams and, in playmaker James Rodriguez, they have one of the stand out players in the World Cup so far, making them possibly the toughest opponents that Brazil have faced so far.

Brazilian talisman Neymar will be fit for the match, but Scolari will be without vital defensive midfielder Luiz Gustavo through suspension after he picked up a second yellow card of the tournament against Chile in the last sixteen. 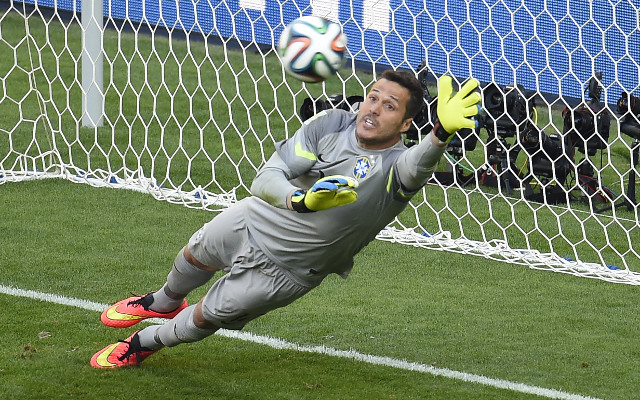 The penalty shoot-out hero of Brazil’s last sixteen scrape past Chile, Julio Cesar has little competition for the Brazilian goalkeeping position. If Colombia keep up their fine attacking form from the earlier rounds of the tournament then he could be a busy man.

One position where there is real debate is right back, where Scolari may choose to opt for Maicon over Dani Alves in an attempt to quell the Colombian threat from the flanks with a more defensively minded option. Whilst Alves is a fine weapon going forward, he has been caught out defensively already in the tournament.

One of the leaders of this Brazilian team, former Chelsea centre back David Luiz showed his cool with a wonderful opening penalty in the shoot-out against Chile. He has formed a strong partnership with Silva in what is an impressive central defence.

Parntering Luiz will be Brazilian captain and Paris Saint Germain stalwart Thiago Silva, who is undoubtedly one of the finest central defenders in world football. Not a vocal captain on the pitch, Silva leads the way with his fine displays at the heart of defence.

Whilst Marcelo offers the same defensive limitations as Alves on the opposite flank, there is no opposite defensive replacement for the Real Madrid man who is almost certain to start on the left for Scolari.