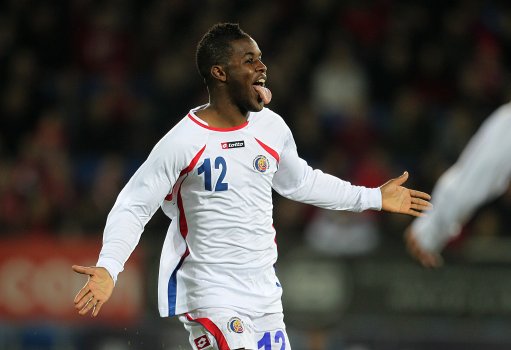 Young attacker set for another temporary spell away from the Emirates Stadium.

Premier League clubs are lining up to sign Joel Campbell, according to reports from the Metro, with Arsenal appearing to be willing to loan the 22 year-old striker out once again despite his blistering performances for Costa Rica in their shock run to the quarter finals of the 2014 FIFA World Cup.

The report suggests that no less than four Premier League clubs are hopeful of landing Campbell on a loan deal for the upcoming season – with Everton, Newcastle United, West Ham United and Southampton all appearing to be big admirers of the player.

Campbell signed for the Gunners in 2011 from Costa Rican club Saprissa, but he has not made a senior appearance for Arsene Wenger’s side, initially being denied a work permit and, as a result, being sent out on loan to Lorient, Real Betis and Olympiakos.

Physically imposing but with a deft touch, Campbell would appear to have the minerals to add plenty to Arsenal’s squad, particularly considering the lack of options that Wenger had to choose from to rotate Olivier Giroud and following the injury to Theo Walcott last season.

Despite this, he seems to be willing to allow Campbell to leave on a temporary basis once again, but this time to prove himself as a stellar performer in the Premier League.