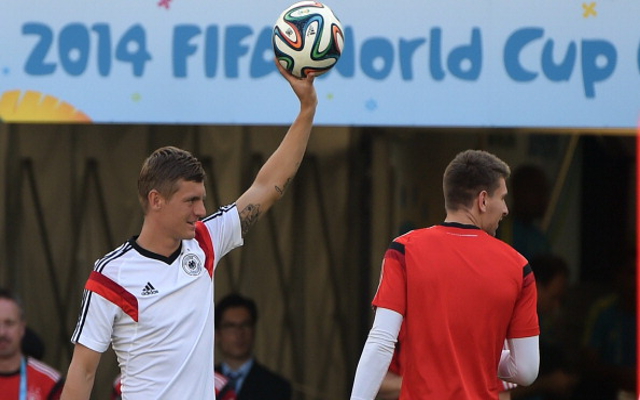 Chelsea are readying a last minute move to hijack Real Madrid’s ongoing pursuit of German midfielder Toni Kroos according to the Daily Star.

The 24 year old is set to leave Bayern Munich and the Bundesliga side have apparently agreed a deal with the Spanish giants but Blues boss Jose Mourinho will launch a last ditch bid to beat his former employers to the punch.

Kroos has spoken out about any potential move stating that no decision would be made any time soon;

“During the World Cup there will be no decision or information,” he said.

“I don’t want to be distracted.

“Then we will decide and announce. But I can’t confirm anything has been agreed or decided. It will not happen during the World Cup.”

This may well give Mourinho time to mount an offer for the midfield schemer as he sets about bringing in further summer signings.

The west London side have already confirmed the signing of La Liga pair Diego Costa and Cesc Fabregas though the outlay for the duo was covered to some degree by David Luiz’s move to PSG.

Kroos has been in long running contract talks with his Bavarian side but seemingly Bayern Munich may look to sell the midfielder as he has just a year to run on his current deal.