Arsenal are edging closer to completing the £26m signing of Barcelona attacker Alexis Sanchez after agreeing terms on a five year contract with the Chilean international.

CaughtOffside understands that Arsene Wenger has met with representatives of the Nou Camp star and his north London side have met the La Liga side’s valuation and will look to have the deal rubber stamped within the next 24-48 hours.

Incoming Barcelona boss Luis Enrique has been keen to cash-in on the former Udinese man and Sanchez has opted against being part of a cash plus player deal that would see Liverpool striker Luis Suarez move in the opposite direction to pursue an Emirates Stadium switch.

Wenger has been keen to bring in further attacking options and sees the versatile attacker as an ideal man for the job.

Arsenal were heavily reliant on French forward Olivier Giroud last season and a move to bring in a player who can not only play in a central striking role but can also provide an effective outlet on the flanks is one that will handily beef up the Gunners attack. 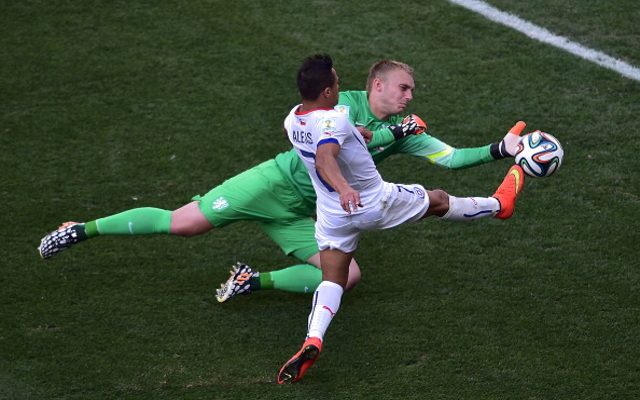 Sanchez enjoyed his most successful goal-scoring season to date last term, netting 21 goals in all competitions, and has followed up his impressive displays at Barcelona with a solid showing at the World Cup finals.

It is thought that Wenger will look to sell forward Lukas Podolski this summer after two fairly average campaigns that have been blighted by inconsistent form and fitness concerns, leading to a limited role in the German national team set-up at the World Cup finals.

Such a sale would lead to Arsenal offering Sanchez the number nine squad number slot that is currently taken up by Podolski.

Sanchez will be handed a contract worth £150k a week that would make him the Arsenal’s second highest earner behind club record signing Mesut Ozil.

Arsenal hope to unveil Sanchez as their new ‘Marquee’ signing early next week with the club looking to have the deal in place ahead of their new Puma kit launch on the 10th of July.