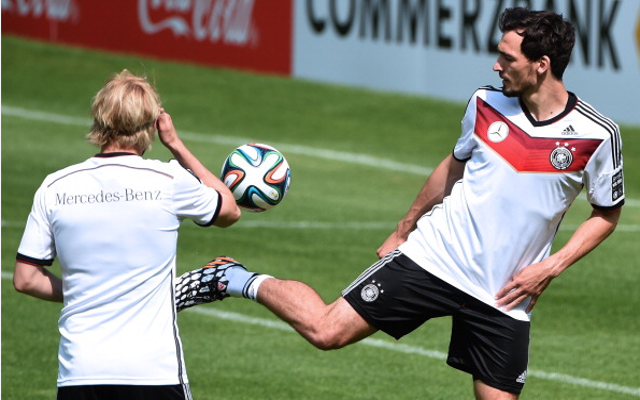 Blues step up interest in Dortmund and Germany defender.

Chelsea could be set to make a move for Borussia Dortmund centre-back Mats Hummels as Jose Mourinho eyes a replacement for David Luiz, CaughtOffside understands.

The Blues are in the market for a new signing in central defence this summer after a £50m deal has seen Brazil match-winner Luiz leave Stamford Bridge for a switch to French champions Paris Saint-Germain.

Although Luiz’s rather gung-ho approach to defending was never really to Mourinho’s liking, his departure has left the London giants somewhat short of options in that position, with little in the way of backup to first-choice pairing John Terry and Gary Cahill.

French youngster Kurt Zouma has been brought in, but is likely to be loaned out to another Premier League side for his first season in English football, while Chelsea have also missed out on Porto star Eliaquim Mangala, who looks set to join their rivals Manchester City.

This could now see the club go head-to-head with Manchester United for the signing of Dortmund stopper Hummels, who has impressed for Germany at this summer’s World Cup, putting in some solid displays at the back and scoring two goals so far, including Friday’s winning strike against France in the quarter-finals.

The likes of Barcelona and Juventus have also been linked with the 25-year-old, who has become widely regarded as one of the best defenders in Europe over the last few years, helping Jurgen Klopp’s side to two Bundesliga titles in 2011 and 2012, as well as to the Champions League final in 2013.

Dortmund’s success has seen a number of their best players poached by big-name clubs, and Chelsea themselves have been linked with another of their key players this summer as they pursue a deal for Gabon forward Pierre-Emerick Aubameyang.

A new defender is a priority though, and Chelsea will now look to test Dortmund’s resolve for Hummels with an opening offer in the region of £25m, which is more than other clubs are reported to have offered so far.

Still, with Aubameyang’s future up in the air and other star players such as Marco Reus attracting plenty of interest, Dortmund will surely do everything they can to keep Hummels at the club as they look to challenge Bundesliga big-boys Bayern Munich for the title again next season.

Hummels’ goal against France yesterday will now see him and Luiz come up against each other in Germany and Brazil’s World Cup semi-final clash.