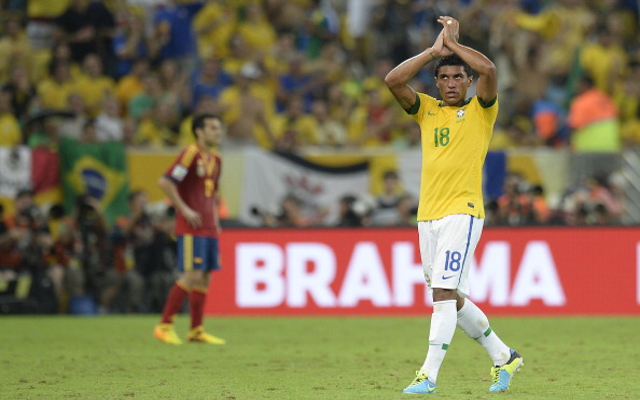 Juventus could make a move for Tottenham Hotspur midfielder Paulinho this summer as key player Arturo Vidal could be heading for a big-money move to the Premier League, CaughtOffside understands.

The Italian giants are fearful of losing Chilean international Vidal to either Arsenal or Manchester United, with rumours that both could be willing to pay around £44m to lure him away from Turin in this transfer window, while there is also strong interest from Chelsea and Paris Saint-Germain in French youngster Paul Pogba.

It is thought that Juventus will only allow one of the two midfield stars to leave this year, with Vidal looking the likelier option at the moment after his impressive showing for Chile at the World Cup, but it could be another South American star who comes in to take his place.

Manager Antonio Conte is seemingly a fan of Tottenham’s Paulinho, who has impressed at White Hart Lane after only signing for the club last summer, joining on the back of a strong showing for Brazil at the Confederations Cup.

The former Corinthians man is a regular for club and country and has shown some of the qualities that could make him a good like-for-like replacement for Vidal, with a strong work-rate, good range of passing, and an eye for the odd important goal as well.

Having previously been linked with a number of big clubs before joining Spurs, Paulinho has also been targeted by London rivals Chelsea this summer, whilst Real Madrid have also supposedly shown some interest in snapping him up.

Still, with their interest having cooled as they both pursue Bayern Munich midfielder Toni Kroos, Juventus could now step up their efforts to bring in Paulinho as they look to go for a fourth straight Serie A title next season.

This would certainly come as a major blow for new Tottenham manager Mauricio Pochettino, who has been tasked with rebuilding a squad that struggled in the big games last season and finished in sixth place.

The Argentine, who moved from Southampton earlier this summer, has not yet made any major signings for his squad, and will not want to lose a player as influential as Paulinho, though the north London club’s lack of Champions League football could be problematic as they look to fight off interest from big clubs in his signature.

The 25-year-old will decide on his future after the World Cup, as he prepares to try and get Brazil into the final as they take on Germany in the last four.