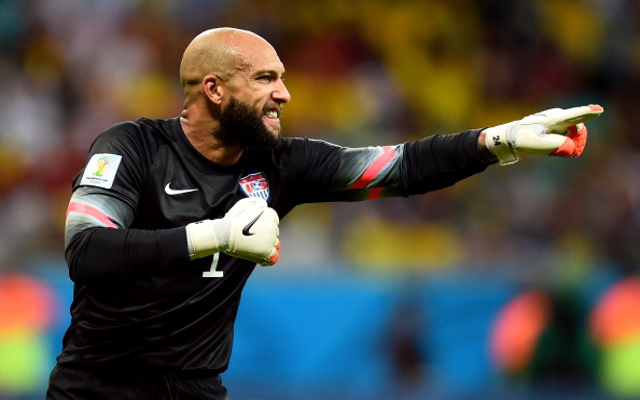 Tottenham Hotspur could be set to make an offer to Everton for in-form USA goalkeeper Tim Howard, who has earned great plaudits for his performances at this summer’s World Cup in Brazil.

CaughtOffside understands that Spurs are ready to grant current number one Hugo Lloris an exit from White Hart Lane this summer if they can land Howard as his replacement, with the Frenchman seemingly keen to move to a club playing in the Champions League next season.

The former Lyon shot-stopper is also heading home from his World Cup duties in Brazil after France’s exit to Germany in Friday’s quarter-final clash, and could soon be allowed permission to open talks with the likes of Real Madrid and Paris Saint-Germain, who have both been linked as long-time admirers of his.

Although the departure of Lloris will no doubt be a blow for the north London outfit, with the 27-year-old establishing himself as one of the best keepers in the Premier League in his time in English football, the arrival of Howard looks like a good investment for the club as they look to progress next season.

With the USA international now 35 years of age, Everton may be willing to let him leave for a reasonable fee as he heads into the final years of his career, but his recent record-breaking performance against Belgium in the World Cup shows that he remains one of the best in the game at the moment.

Howard has been a key player for the Toffees since he moved to Goodison Park back in 2007, having previously failed to make the grade with Premier League giants Manchester United in a disappointing spell at Old Trafford.

Still, he may now get the chance to enjoy one more big move in his career as new Tottenham manager Mauricio Pochettino hopes to add him to his squad for next season.

Howard will get the chance to work alongside another great American goalkeeper in Brad Friedel if he does make the move to White Hart Lane, with the former Blackburn Rovers and Aston Villa man currently on the books as a backup at the club, as well as a club ambassador in the US.

It remains to be seen what kind of fee Everton will agree to sell Howard for, but it is no surprise to see the player’s stock rise after his eye-catching displays for his country this summer.