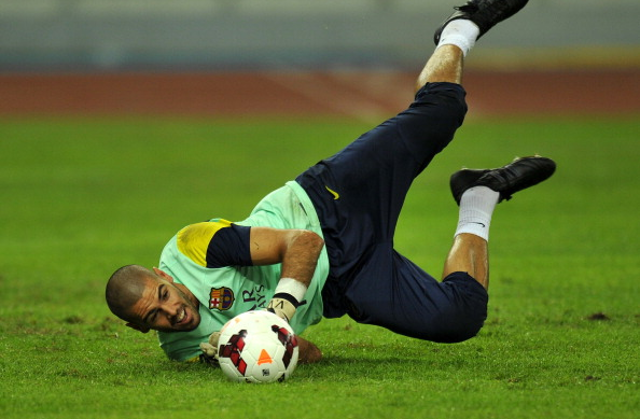 Premier League sides Manchester United and Arsenal are set to move in for free agent goalkeeper Victor Valdes, according to the Mirror, with the Spanish international once again available after he failed a medical with Ligue 1 side AS Monaco.

The 32 year-old had spent his entire career with Barcelona before leaving on a free transfer this summer, playing almost 400 La Liga games for the Catalan club.

Both clubs are keen to secure some competition for their current first choice goalkeepers, with Louis van Gaal reportedly concerned by a lack of quality back-up for David de Gea and Arsene Wenger keen to secure someone to battle it out with Wojciech Szczesny after Lukasz Fabianski departed for Swansea City.

Whether either club would be willing to shell out the wages that would be commanded by Valdes on a reserve goalkeeper remain to be seen, whilst he is also likely to be keen for first team football in what could be his final contract.

That said, the huge contract that he had agreed with Monaco seemed dependent on Valdes being willing to compete with current first choice and Croatian international Danijel Subasic for his place in the team.

One of the legendary figures of one of Barcelona’s finest ever periods, Valdes joins Carles Puytol in leaving as the old guard begin to depart from the Nou Camp.