Bernabeu side look to trump Nou Camp rivals in push for Anfield star.

Real Madrid are ready to re-enter the race to sign Liverpool striker Luis Suarez with Bernabeu president Florentino Perez prepared to fork out a world record fee to land the Uruguayan ahead of arch rivals Barcelona.

CaughtOffside understands that Perez had initially opted to pull out of the race for the Uruguayan, not because of his latest unsavoury incident but because he was looking to raid Ligue 1 side AS Monaco for Colombian pair Radamel Falcao and James Rodriguez.

However moves to sign the duo have hit the buffers with the principality club not willing to entertain the loss of their two most pivotal performers, not with a return to the Champions League having been secured.

Barcelona had appeared to be in the driving seat and it’s thought that Suarez may prefer a move to the Nou Camp, however Liverpool are keen to see a bidding war erupt in pursuit of a player they are ready to sell.

Carlo Ancelotti has been looking to land a striker who can more ably fill a central striking role than current first choice forward Karim Benzema and the Italian is open to a move for Suarez despite the fact that the 27 year old will miss the opening months of the campaign following FIFA’s decision to hit the former Ajax man with a four month ban for biting Italian international Giorgio Chiellini.

Real Madrid, and indeed Barcelona, will both look to have that ban reduced once they sign the Premier League hot-shot though Liverpool have made their mind up to cash-in on Suarez regardless of such an appeal.

Liverpool’s American owners have elected to sell Suarez after his latest indiscretion and are now simply looking to get the best deal possible for his services.

Barcelona’s decision to try to keep the cost of such a deal down by offering Chilean Alexis Sanchez in a part-exchange deal has given Real Madrid the chance to re-assert their financial dominance over their La Liga rivals.

Barcelona’s contract offer would have made Suarez the club’s fourth highest earner behind Lionel Messi, Neymar and Andres Iniesta whereas Real Madrid are ready to offer a deal that would leave him second only to Balon d’Or winner Cristiano Ronaldo.

Real Madrid will table a €120m (£95m) bid for Suarez in the coming days and are confident that will lead Barcelona to turn their attentions elsewhere.

Club president Perez has no qualms about offering such a fee and sees the deal as an investment that will be more than repaid in commercial activity with kit sales alone likely to cover a significant portion of the outlay. 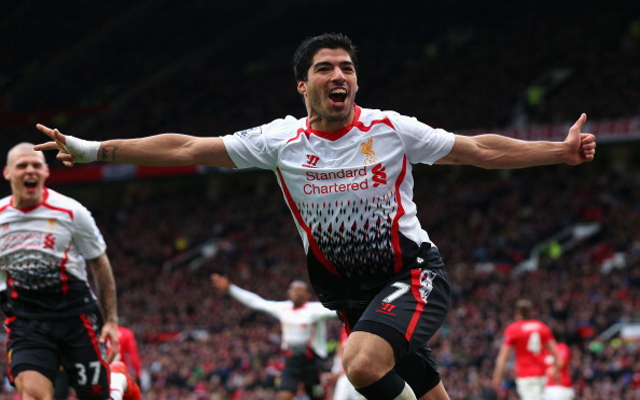 Real Madrid set the world record transfer fee both in 2009 when they paid Man United £80m for Cristiano Ronaldo and last summer when they spent £85m on Tottenham winger Gareth Bale and having secured their coveted ‘Decima’, their tenth European Cup/Champions League triumph, the Spanish capital side are keen to issue a real statement of intent this summer.

Suarez finished as the Premier League’s top scorer, his tally of 31 some ten goals ahead of his nearest rival, and the South American is arguably the most in-form player in world football at present and as such is a player Real Madrid are willing to pay handsomely for.

Ancelotti will be encouraged to sell a number of first team squad members to help cover a portion of the cost with the likes of Isco, Angel di Maria, Iker Casillas and Karim Benzema likely to be offloaded for fairly high sums.